It’s hard to send a letter to you, because I don’t yet know who will be occupying those offices at City Hall. But, whoever you are, your first week in office, you will be pressured to approve a plan to wall off a major public plaza, the historical heart of so many of San Antonio’s cherished celebrations.

Please do not vote unconditionally to support the Reimagining the Alamo Master Plan in a rush to meet the budgetary cycle of the State Legislature.

There is much merit to parts of the proposal. The Alamo building itself is crumbling, and the plan targets its restoration and preservation. That is urgent.

The Phil Collins Collection is waiting for a home in San Antonio, and the State has acquired several historic structures on the westside of Alamo Plaza to display the valuable artifacts. (Adaptive reuse is wonderful, but please urge the State to reconsider gutting the entire interior of the landmark Crockett Block, designed by Alfred Giles.)

So the east and west parts of the plan on the state’s existing turf seem on somewhat sound ground. But then we get to the plaza.

As we approach San Antonio’s Tricentennial, we should be particularly attuned to the city’s early history. But, at least in the Executive Summary,* the Master Plan ignores the history of Mission San Antonio de Valero – a site not dubbed the Alamo until years later.

In the aftermath of the Battle, General Santa Anna ordered his troops to destroy as much of the site as possible. This was the beginning of the decline of the historic Alamo compound. Restoring the reverence and dignity of the Alamo is the obligation of our generation and the mission of our efforts.

Reimagining apparently calls for walling in the plaza and locking it up every night. The planners evidently believe members of the public incapable of envisioning the original walls of the compound. To do so, they must be restricted from entering the plaza aside from as a herd entering through a southern portal.

If returning the Alamo compound to its appearance at the time of the battle truly was a principal adhered to by the Master Plan, the “bold” plan would call for the removal of the iconic parapet added later by the United States Army.

Vehicular movement north and south through downtown currently is impaired. Removing another street from the existing clogged pattern is impractical. Yet, even so, it is difficult to argue that closure would not enhance the experience for pedestrians on the plaza.

But ceding the rights of pedestrians to cross through the plaza makes absolutely no sense. Public parks should be porous, easily accessible from all sides. Yet access to this civic space will be reserved to one entryway on its southern side.

Behind glass, this current pedestrian crossroad will become a dead-end. An Alamo cul-de-sac.

The city of San Antonio has struggled for years to revive Houston Street, and it finally provides a healthier retail environment. Houston Street merchants will again disappear if they lose the pedestrian traffic they need. Pedestrians will all be funneled in and out by way of Rivercenter.

Trees will be removed from the center of the plaza between the Alamo and the Crockett Block to create an open space, a space too hot under the Texas sun for anyone to linger.

A sizzling comal for tourists. A playground for reenactors. A place locals will avoid. 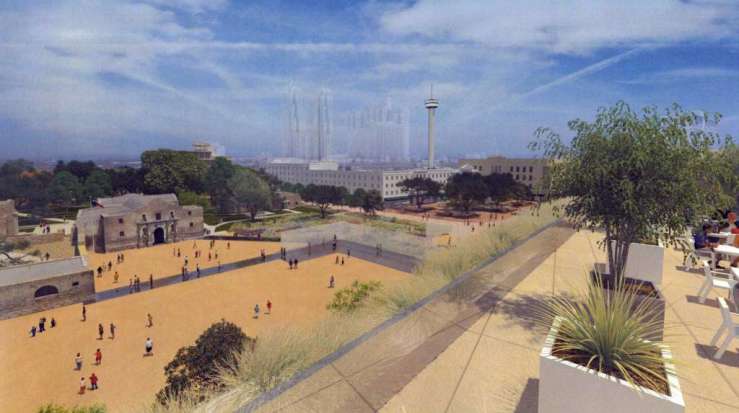 Paraphrasing W.S. Merwin, there is no recipe for “unchopping a tree.” Walk the Mission Reach of the San Antonio River Improvements Project and envision how many years, or generations, of growth it will take for the new saplings to recreate the groves of trees Spanish missionaries originally found along the river’s banks.

In exchange for placing much of the city’s space in a fishbowl with restricted access, the plan offers San Antonio “a new civic space – Plaza de Valero,” a tiny sliver of the plaza in front of the Menger Hotel. This is billed as: “an opportunity for visitors to have a quiet moment, in the shade of mature trees, enjoying food and refreshments, as they experience the reimagined Alamo.” This “new” space already exists.

The very definition of civic is “relating of or to a city or town or the people who live there.” We have a great civic space, the entire plaza, now. A place for exuberant celebrations and the exercise of first-amendment rights, rights championed by those who died at the Alamo. A spot for gathering in the shade of trees.

There is no reason City Council cannot approve the Alamo restoration on the east and the Museum concept on the west side of the plaza as envisioned in the Master Plan on May 11.

Obviously, improvements can be made to enhance historical interpretation in the plaza, but eliminating Alamo Plaza as a pedestrian passageway or civic gathering place for your citizens need not be a requisite to forward a portion of the plan. Judgment on the disposition of the roadway and plaza should be withheld pending refinement and public release of the full plan.

The many volunteers and professionals tackling this project should be commended for their efforts. But that does not mean this initial plan merits a rubber stamp. The streets and plaza belong to the City of San Antonio.

Please request a reexamination and rethinking of this portion of the plan. Don’t consent to turning a beautiful urban park into a walled-off wasteland of a plaza. A place completely isolated from the fabric of San Antonio.

Thank you for your consideration of this request from a concerned citizen.

P.S.  If one haunts the place of one’s death, would it not seem a Sisyphean hell if the only thing you got to witness was men reenacting your painful death over and over? Would you want the site of your bloody end preserved in the desolate state it was in in the aftermath of your death?

Or would you want to witness people actively enjoying the freedom for which you fought on a daily basis?

One resembles a horror film, the other a fulfillment of your dreams.

*As of this time, the only portion of the plan available to the public online is the sketchy Executive Summary. The public comments you receive prior to voting are based solely upon that and what can be pried out of presenters during hearings. The publicly funded Master Plan appears a closely guarded secret.