On the positive side, the Daughters of the Republic of Texas should be congratulated for managing to keep the Alamo admission-free for decade after decade.   And many a nonprofit has experienced nasty inner-board feuding at some point; the feuds generally, however, do not spill over to front-page stories.  The Daughters vigilantly have stood watch to prevent over-commercialization of the iconic landmark, a daunting task in a city where there are probably a thousand businesses named Alamo-something-or-other.

Perhaps the time has come to charge a dollar or two to enter the Shrine of Texas Liberty.  The Daughters have become so desperate for funds, they themselves are violating the integrity of the hallowed grounds.  The pop-up tent they erected last year to hawk their audio tours sparked my anger last year, resulting in some of the ugliest, protest collages ever made.

That architectural blight on the grounds has remained a seemingly permanent fixture; they have now even winterized their pop-up with plastic sheeting all around.  A visit on Texas Independence Day indicates the Daughters might have lost their bearings in the quest for funds.  The Daughters tastelessly have installed a huge banner – larger than life – advertising their new Allies of the Alamo membership group immediately to the right of the entrance to the Alamo.  Without even backing oneself out into the street, it is possible to snap a photo that catches the Alamo facade, the banner and the pop-up in one trashy image.

Legislators, enact a law so the Daughters can charge the 2.5 million visitors who cross your threshold each year a dollar a pop if you must; I am sure they would gladly pay instead of having ads thrust into their photographs.

Daughters, lose the pop-up tent and the banner before the Alamo “falls” during the reenactment on March 6. 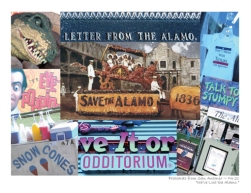 Postcards from San Antonio No. 22 “They’ve Breached the Walls”

Postcards from San Antonio No. 21 “We’ve Lost the Alamo”

New addition to the Alamo

Maybe they should make it larger to get their attention.

The framework anchored by a plastic barrel complements the arched entryway to the grounds perfectly.

HDRC to the rescue, or are we waiting for a hurricane to blow this all away?

The City of San Antonio’s historic viewshed should be protecting the Alamo from its keepers, as well as the danger of development encroaching from behind.  Since I created the ugly Alamo collages last year, things have only gotten worse.  I took a special Texas Indepence Day souvenir shot of the motley set up gracing the sidewalk in front of Pat O’Brien’s.  The Historic Design and Review Commission should tour the entire Alamo Plaza Historic District.

The Allies of the Alamo banner is like Travis’ plea for help.  Someone needs to answer in time.

If the Daughters can put an ad in front of the Alamo, surely I can insert one into this blog.  To see more Alamo collages, click here.