As 2016 begins, you, once again, have given me an excuse to write about whatever strikes me. Your favorite posts on this blog during the past six months are as random as the thought process of the writer pecking at the keyboard.

I have to admit I love it that you continue to let the ghost of Helen Madarasz haunt Brackenridge Park, care enough about the future of Alamo Plaza to go back to old rants and are still looking for the cowgirl’s “San Antonio Song.” You care about art and artists of San Antonio, even when the art is tiny, and cherish San Antonio’s Fiesta traditions, even when raucous. And you tolerate family stories and postcards from our travels. All of these are therapeutic breaks for the blogger struggling to complete the story of the Coker Settlement.

The numbers in parentheses represent the rankings from six months ago:

Thanks for dropping by every once in a while. Love hearing your feedback.

You have done it again. No wonder I wander around flitting arbitrarily from subject to subject. My readers flit, too.

During the past year, you have remained as Alamobsessive as I, particularly focusing on the guns  Land Commissioner Jerry Patterson let be drawn in front of the Alamo. You joined me in remembering my father-in-law, George Spencer, and photographer Rick Hunter. You have demonstrated your interest in photography by two artists, Richard Nitschke and Sarah Brooke Lyons. You have let me take you traveling to San Miguel de Allende, and shown interest in the reign of Maximilian and Carlota in Mexico.

You refuse to let two old posts, one about David Sedaris’ “Nuit of the Living Dead” and one about Sandy Skoglund’s cheesy “Cocktail Party,” fade off of the top 12 list. It makes me particularly happy that you still show interest in the San Antonio Song and have given life to my true tale providing a ghost to inhabit Brackenridge Park.

The number in parentheses represents the rankings from six months ago:

Thanks for hanging out here some and for giving me permission to keep on rambling on about whatever I’m currently pondering.

Wonder what the older girls think when the Mister introduces a new one into the harem, watching as he lovingly caresses the curves of the latest arrival.

Not one of them has been a part of his life for more than 20 years, except for one with such a wimpy, wispy voice he rarely touches her. No electric sparks fly through her veins.

The flaming red-haired Gibson girl always thought she was his favorite, even after he brought in the skinny, slender-hipped, bleached-blonde.

But then came the gaudy one from Austin with a gypsy-sounding name wearing all that turquoise.

The Gibson girl was confident she could triumph over the tackily clad Mother-of-Toilet-Seat one who likes to lazily lay across his lap, but that turquoise tart?

The gypsy thought she won his heart, but his love was fleeting.

The room is so crowded; yet he found a way to squeeze in one more.

This one, like the gypsy, is young. The child of guitar-maker Chuck Thornton belonged to Jay Wright, who broke her in, then struggled to part with her.

Wright loved her so much, he almost made her a cover girl before letting her go. When the Mister snapped her up on eBay, Wright wrote to him gushing about her attributes and telling him how lucky he was to have her. 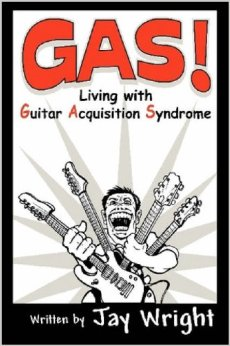 Wright also sent the Mister the book he published about living with “G.A.S.,” or “Guitar Acquisition Syndrome,” an addictive affliction affecting many men who obsessively keep adding to their harems.

The book, featuring the Mister’s newest acquisition on the page just before its table of contents, is a manual. A tongue-in-cheek primer not for curing the addiction, but for justifying it. It’s filled with how-to hints for hiding the disease’s symptoms from your significant other. A litany of excuses and ruses, such as this one:

Display your guitars in different rooms. Spread them out – to a bedroom corner for one, beside a TV or piece of furniture in another room, in a closet, or under a bed. A herd never looks as large dispersed as it does clustered together in one room.

The Mister needs no excuses. Someone married to a writer needs a major outlet of their own.

So how do I feel when the Mister’s in his lair and I overhear him making one of his girls sing, even scream, loudly?

Hey, I’m upstairs tapping away on my keyboard humming along.

I say keep playing those blues, bearing in my mind what he said before one of those significant birthdays:

Some men get new wives when they turn 40; all I want is an electric guitar.

Okay, that was an understatement. He wanted more than that first redhead.

But no need to hide or thin out the herd.

Surely the space in that music room is maxed out by now….

And, if I did object?

I think I might hear a loud chorus of “I’m gonna sell the bitch’s car and buy myself a cool guitar.”

And visit the After Midnight Blues Band at www.bluesinsanantonio.net.