He slipped on his headset and headed off through the swirling psychedelic lights. Egged on by the pied piper (“…at the Gate of Dawn”) playing in his ears, the Mister eagerly followed Alice traipsing down a rabbit hole of a time machine to his high school days.

Pink Floyd definitely was not on our minds when planning our daily agendas in Rome. In fact, if you had asked me, I could not have recalled when Pink Floyd was last on my mind.

But there we were. All comfortably fed and wined after a nice lunch. Standing at the door of MACRO, Museo D’Arte Contemporanea Roma. And there it was. The ticket counter for “The Pink Floyd Exhibition: Their Mortal Remains,” fresh from its debut at the Victoria and Albert Museum in London.

We considered walking away. The price tag for entry to the half-century retrospective was double that for most museums in Rome. And Pink Floyd? Fifty years of Pink Floyd?

But, then again, maybe we needed a vacation break from all those churches, ancient sculpture and Renaissance art. And other tourists.

Standing in the lobby, this exhibit certainly resonated loudly as a major escape. So we paid up and donned our headsets and started wandering back to sounds not heard since much more youthful days.

Five minutes in, even I was happy we had. I never had any Pink Floyd albums of my own and was surprised to be reminded of how much of their music was playing in the background of my world during the 1970s and 1980s.

inflatible man from 1977 “In the Flesh” concert tour

inflatible man from 1977 “In the Flesh” concert tour 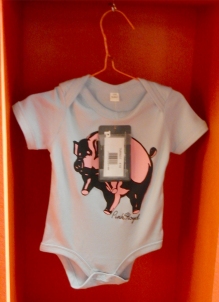 a onesie for cultivating a new generation of band fans

The sound system was amazing; completely absorbing you; shifting as you wandered to different points in the exhibit at your own pace; fading in and out pleasantly, not abruptly. It left you free to move back and forth at will, and the Mister and I, while never standing more than 15 feet apart, structured two entirely different agendas.

We both watched portions of concerts, but the Mister parked himself in front of guitars, amps, mixers, and soundboards, growing increasingly more complex through the years the band played. I assume he was listening to soundtracks from albums on which they were used.

On the other hand, I was drawn to the stories. Interviews about Syd Barrett’s mental illness leading to his expulsion from the band in 1968; about songwriting; about album design; about set design for concerts. All were fascinating.

We stayed in the time machine for about three hours and easily could have slowed our pace. So, quick. Hop on a plane to Rome. You have until May 20th to catch the exhibit there.

Every year is getting shorter, never seem to find the time. Plans that either come to naught or half a page of scribbled lines. Hanging on in quiet desperation is the English way. The time is gone, the song is over, thought I’d something more to say.