Susan Toomey Frost’s obsession with vintage San Antonio tiles led her to her first postcard featuring a photograph by Hugo Brehme (1882-1954). In her introduction to Timeless Mexico: The Photographs of Hugo Brehme, just released by the University of Texas Press, she explains how she ended up in relentless pursuit of his work:

My Brehme collection began innocently with an image of a winsome young woman in the traditional folkloric dress of a China Poblana. She was standing in front of a tile doorway at the ex-convent of Churubusco, but it was really the tiles surrounding her that interested me.

In researching the history of tile making in San Antonio, I reasoned that vintage photographs of tiles could help me solve a puzzle. Which of the tiles installed in San Antonio were made locally and which were made in Mexico, California, or elsewhere? If I found a specific design pictured in a vintage postcard from Mexico, for example, I could be assured that the same design found in San Antonio was imported and that local San José workshops had not made it.

And so I began acquiring tile images in earnest. I found most of them on Mexican postcards, but I soon was buying images that didn’t picture tiles. Certain photographs stood out because of the inherent beauty of their subject matter and the quality of their execution. I began noticing that many of the better images were signed by someone named Brehme. Thus a new obsession had begun.

Susan devoted countless hours scouring the internet and monitoring eBay auctions. Collecting made her a whole new group of associates and friends throughout the country as she solicited card collectors and gallery owners to watch for both iconic and rare images of Mexico preserved by the German-born photographer.

In the foreword to Susan’s book, Stella de Sá Rego describes the pictorial style characterizing some of the Brehme’s most easily identifiable prints:

Although aware of his adopted country’s problems, he chose to present what was beautiful, unique, and distinctive about Mexico. He crafted his images with the greatest care, both in terms of composition and printing. The result is seductive: graphically strong images in a lyrical Pictorial style. That style had its origins in the nineteenth-century Romanticism that infused German culture when Brehme was a young man….

Pictorialist photographers sought to achieve the look and status of fine art (e.g., painting) for their works. To achieve this they employed various techniques. Dramatic lighting—as in images made at twilight or with watery reflections, for example—evoked a still, fin-de-siècle mood. The nostalgic quality was heightened by the use of toners or processes such as gum bichromate or platinum printing that rendered a soft, painterly look. 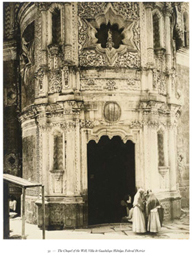 Porfirio Díaz’s regime was Eurocentric, modeling its capital on Paris as a city of palaces, while the majority of Mexico’s oppressed citizens were on the verge of starvation. The new nation no longer wished to look to Europe, but inward with pride in its emerging national self-recognition. The new nationalism celebrated Mexico’s natural beauty, its indigenous heritage and its pyramids and archaeological artifacts. Brehme created indelible images that reinforced Mexico’s identity and the search for its roots. Consequently, Brehme seldom pictured the middle and upper classes in his postcards and photography books….

Through the years, we spent an absurd amount of vacation time waiting… and waiting… for people to wander out of our picture frame before we would snap photos of landmarks. As a result, we have boxes of slides devoid of any human scale or connection. Only recently did we finally realize the error of our ways.

If only we had this collection of Brehme to view earlier. As Susan writes:

Throughout his published work, Brehme typically included human figures in the compositions to give a sense of size or perspective. He usually placed human subjects at a distance and seldom shot close-ups.

And a wonderful quirk Susan discovered – similar to spotting Alfred Hitchcock in his films – is that sometimes the human figure was Brehme himself.

This spring, some of the 1,900 items relating to Brehme Susan has donated to The Witliff Collections at Texas State University will be featured in a major exhibition.

Of course, the donation probably has left Susan with a large hole in her heart and her home to fill. Wonder what obsession is taking their place?

Susan will be among the collectors explaining why they do what they do at the Witte Museum from 1 to 4 p.m. on Saturday, November 12.

But, be forewarned, collecting is a highly contagious disease.

Before I even finished reading Susan’s introduction, I found myself following her leads to interrelated distractions. Are any Brehme postcards lurking in my drawers? Then, her words sent me pulling Frances Toor’s A Treasury of Mexican Folkways off the shelf to look for Brehmes. Soon I found myself comparing Carlos Merida’s “Seri Woman with Mask” to Brehme’s (?) photos of Seri women in the book. The silver bracelet on my arm is by Bernice Goodspeed, but I had no idea she had written guidebooks.  Oh, no, I am headed to eBay in search of a copy. And even while looking for that, I begin to wonder if I am too late to find any of the original books of Brehme’s photos for a price less than astronomical.

Help… I’m being pulled into the swirling vortex. Is there a known antidote? Or do I stop fighting and be swept along with the current wherever it leads?

Update added on December 4, 2011: Steve Bennett reviews Timeless Mexico in the Express-News and reports that the opening date for the Brehme exhibition in the Alkek Library at Texas State University is January 23.

1 thought on “Obsession preserves a slice of time in Mexico”