Only a decade or so old, but WordPress kept dropping hints that my blog format was outdated and becoming obsolete. The time was approaching that it would no longer function on the platform.

So here it is: the first post with a new look in a format I am trying to master. I promise not to include any of the curse words that my slip out of my mouth as I try to make heads and tails of it.

It happens to be that time of the year, halfway through, for that exciting list of what posts you have clicked on most during the past 12 months. My book has not dropped off the list yet, and I am grateful for that and that you continue to let the blog play boulevardier even though the writer actually is in a state of corona-hibernation.

END_OF_DOCUMENT_TOKEN_TO_BE_REPLACED

The leisurely pace of Lecce makes it easy to indulge in the luxury of sweet idleness in one’s travels. Boulevardiers and flaneurs feel comfortably at home. 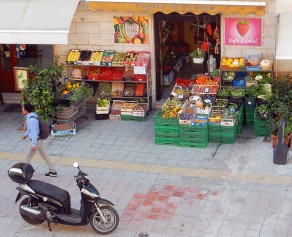 Fruit and vegetable stand across the street from our apartment.

Tile wood-fired stove and oven in our apartment rental in Palazzo Pio. The copper pots that appear as though resting on burners actually are fitted into the openings, with about 3/4 of the pot sunken into the wood-burning area. And, yes, there also was a modern gas one for our use.

The statue of Saint Orontius was removed from its high column for restoration.

Before we leave Italy, duck your head into one final museum: Museo Archeologico Faggiano.

Luciano Faggiano planned on opening a restaurant in the historic center, but his quest proved a pipe dream. Or a pipe nightmare, as it turned out.

The plumbing kept backing up, and the only remedy would be to excavate in search of the ancient sewer pipes. He summoned his two older sons back from college to help. Just for a week at most.

The pipe proved elusive. But the more they dug, the more underground chambers they uncovered. With each new opening, the older brothers would lower their 12-year-old sibling down through the hole to report back before they proceeded. The ancient stone walls contained thousands of archaeological artifacts. As they progressed, the men hauled the excess rubble away in their car.

A suspicious neighbor reported them to authorities, and everything ground to a halt. The government pushed plumbing down to a lower priority, and not a spade-full of dirt could be turned without the presence of an observer from the Ministry of Cultural Heritage and Activities. Most artifacts uncovered belong to the government and are displayed in state-run museums.

The restaurant? It is now a family-run archeology museum, leaving visitors to explore several ancient tunnels and tombs which extend past the property line of this former convent.

Now, Luciano has bought the house behind it, and the excavations continue. The possibility that either will ever serve guests pasta appears unlikely. A couple enters the museum and pays about $10; a couple in a typical restaurant in Lecce would pays about $16 for two full plates of pasta. The museum business appears both easier and more reliably profitable.

Two of the Faggiano brothers

These  represent the final batch of photos from our relaxing stay this past fall. But our armchair travels have assumed such a leisurely pace during shutdown that one more trip remains. Next stop: Merida in Mexico.

She-Wolf and Oak Tree, Symbols of Lecce, on the Façade of the Church of Saint Irene

Baroque churches of Lecce are filled with putti frolicking amidst birds and pomegranates, twisting Solomonic columns covered with intricate lacelike carvings, images of saints and some of their bones.

The patron of Lecce, Saint Orontius, atop the Cathedral

Baroque well in the cloisters of the Seminary Palace