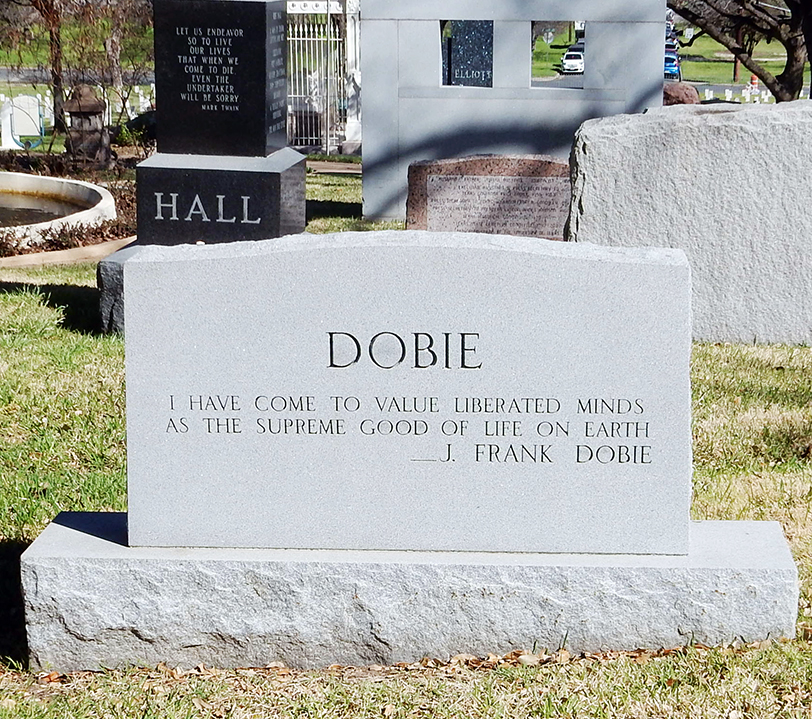 Let us endeavor to live our lives that when we come to die even the undertaker will be sorry.

Words of Mark Twain engraved on the memorial for Bertie Lee Hall (1926-1999), member of the Texas House of Representatives, storyteller and writer

Getting to the cemetery first is not a race you normally want to win, but, when General Edward Burleson (1798-1851) died, leaders of the Republic of Texas realized they were caught flat-footed as to where to honor their heroes. Burleson had served with Ben Milam in San Antonio; fought at San Jacinto; and served as Vice President of the young republic. House member Andrew Jackson Hamilton (1815-1875) offered his own property in East Austin, with the state assuming responsibility for the burial ground in 1854.

Other prominent figures from the early days of the Republic of Texas gradually were reinterred in places of honor in the Texas State Cemetery. The remains of Stephen F. Austin (1793-1836) were moved from Peach Point to a commanding spot by Governor Oscar Colquitt in 1910. The statue of him was made by San Antonio sculptor Pompeo Coppini (1870-1957), creator of the currently controversial Cenotaph in Alamo Plaza.

END_OF_DOCUMENT_TOKEN_TO_BE_REPLACED

No time to pause for even the slightest genuflection in this lightening-fast tour of more than a dozen churches in Rome.

You might think this blog has dragged you through every single church in Rome, but, no. One could spend a year visiting a church a day without exhausting that supply. Rome is divided into 339 parishes, and there are close to 70 basilicas within the city. Probably all are worth ducking into for a visit.

But, mercifully, our tour stops here.

On this whiplash final lap, am going to point out two major relics of the type upon which most American Catholics never lay their eyes. The reliquary above is said to contain “the first foot to be entered in the tomb of Christ,” that of Mary Magdalene enshrined in the Basilica di San Giovanni dei Fiorentini. And the other is a portion of the head of Saint John the Baptist housed in a chapel in the Basilica di San Silvestro in Capite.

I wonder whether anyone ever has developed a scavenger hunt for spying saintly parts tucked away in nooks and crannies in churches in Rome.

A shortcut to encountering a massive number of bones, if one is so inclined, is to seek out the Capuchin Museum and Crypt tucked under Santa Maria della Concezione. The church was commissioned in 1626 by Pope Urban VIII (to whom you were introduced during my “wild things” museum meltdown) in recognition of a relative who was a Capuchin friar, Cardinal Antonio Barberini. Cardinal Barberini had the remains of thousands of his Capuchin brethren transferred to the crypt, which provided monks with a creative side unusual materials for their assemblages.

The museum offers a rather dry history of the Capuchin order, somewhat interesting if not for the macabre magnetic pull of the crypt you know lies on the far side. I doubt much has changed there since Mark Twain’s visit long ago, so I will let him describe the interior:

There were six divisions in the apartment, and each division was ornamented with a style of decoration peculiar to itself – and these decorations were in every instance formed of human bones! There were shapely arches, built wholly of thigh bones; there were startling pyramids, built wholly of grinning skulls; there were quaint architectural structures of various kinds, built of shin bones and the bones of the arm; on the wall were elaborate frescoes, whose curving vines were made of knotted human vertebrae; whose delicate tendrils were made of sinews and tendons; whose flowers were formed of knee-caps and toe-nails. Every lasting portion of the human frame was represented in these intricate designs (they were by Michael Angelo, I think,) and there was a careful finish about the work, and an attention to details that betrayed the artist’s love of his labors as well as his schooled ability. I asked the good-natured monk who accompanied us, who did this? And he said, “We did it” – meaning himself and his brethren upstairs. I could see that the old friar took a high pride in his curious show. We made him talkative by exhibiting an interest we never betrayed to guides.

“Who were these people?”

“We – upstairs – Monks of the Capuchin order – my brethren.”

“How many departed monks were required to upholster these six parlors?”

“These are the bones of four thousand.”

“It took a long time to get enough?”

“Their different parts are well separated – skulls in one room, legs in another, ribs in another – there would be stirring times here for a while if the last trump should blow. Some of the brethren might get hold of the wrong leg, in the confusion, and the wrong skull, and find themselves limping, and looking through eyes that were wider apart or closer together than they were used to. You can not tell any of these parties apart, I suppose?”

He put his finger on a skull. “This was Brother Anselmo – dead three hundred years – a good man.”

And, as this is a whiplash tour of churches, our friend Chris’ seconds-long forbidden video recording of the interior seems appropriate.

I asked the monk if all the brethren upstairs expected to be put in this place when they died. He answered quietly:

“We must all lie here at last.”

Catholicism remains a religion of many mysteries, even for someone who was raised as one, particularly during the years when mass still was said in Latin. Like, when near the end of the service, the priest would talk about Nabisco crackers: “Dominus vobiscum.” “The Lord be with you,” lost in translation between the priest’s lips and my ears.

Whenever you travel, you always come across things you’d love to see at home. These are listed randomly, not ranked. Click on the photos to see larger images or the highlighted links if you would like to see additional related photos.

Note Added: The featured photo strangely popped up on my facebook page immediately after I posted this. Thanks to Mark Twain for providing it.