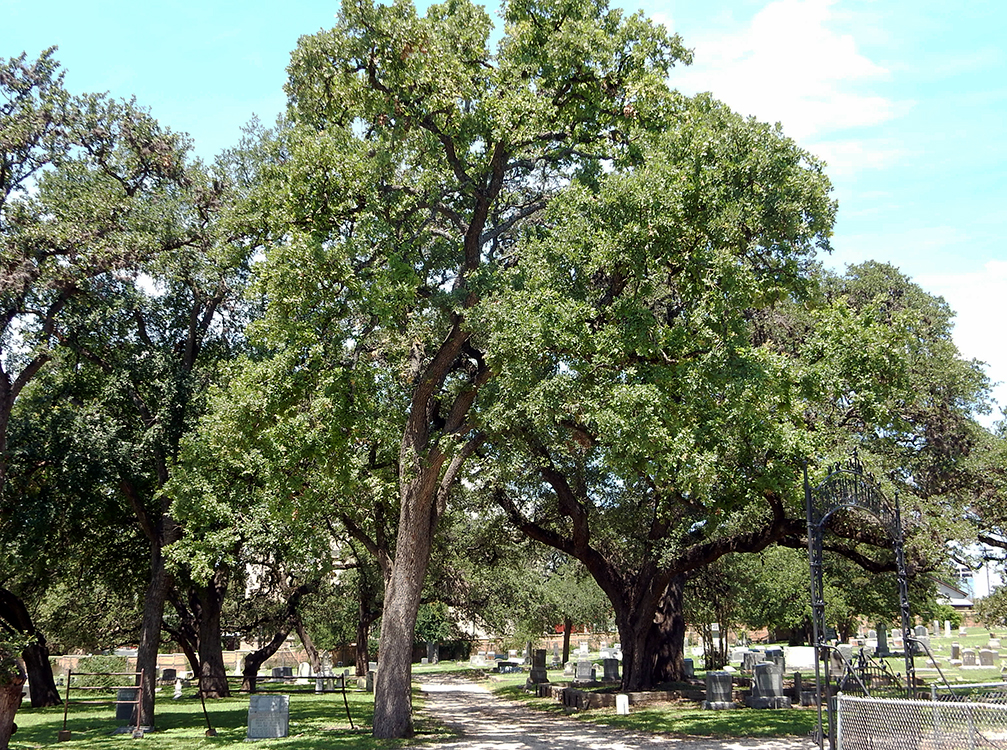 At the urging of President Mirabeau B. Lamar*, the Congress of the Republic of Texas selected a site on the Colorado River to serve as the country’s capital. In October of 1839, the government was loaded into oxcarts and moved to a site bounded by Shoal Creek and Waller Creek and newly named in honor of Stephen F. Austin.

By January 1840, the population swelled to 839, and the need for a cemetery was obvious. The original core of what would later become known as Oakwood Cemetery is marked on the right of the map above.

END_OF_DOCUMENT_TOKEN_TO_BE_REPLACED

Let us endeavor to live our lives that when we come to die even the undertaker will be sorry.

Words of Mark Twain engraved on the memorial for Bertie Lee Hall (1926-1999), member of the Texas House of Representatives, storyteller and writer

Getting to the cemetery first is not a race you normally want to win, but, when General Edward Burleson (1798-1851) died, leaders of the Republic of Texas realized they were caught flat-footed as to where to honor their heroes. Burleson had served with Ben Milam in San Antonio; fought at San Jacinto; and served as Vice President of the young republic. House member Andrew Jackson Hamilton (1815-1875) offered his own property in East Austin, with the state assuming responsibility for the burial ground in 1854.

Other prominent figures from the early days of the Republic of Texas gradually were reinterred in places of honor in the Texas State Cemetery. The remains of Stephen F. Austin (1793-1836) were moved from Peach Point to a commanding spot by Governor Oscar Colquitt in 1910. The statue of him was made by San Antonio sculptor Pompeo Coppini (1870-1957), creator of the currently controversial Cenotaph in Alamo Plaza.

END_OF_DOCUMENT_TOKEN_TO_BE_REPLACED

Tucked away in a corner of the sixth floor of the Central Library is my favorite haunt there, the Texana and Genealogy Department. The stunning blond entry room named in honor of donors Joan and Herb Kelleher welcomes you into a world where often forgotten tales emerge from yellowed pages of precious books.

Research needs have left me hunched over microfiche readers for hours, distracted by fascinating newspaper headlines unrelated to my original quests. So many people from our colorful history, all with their own stories waiting to resurface. Shelves lined with rare books, rare enough to be unavailable for checkout, beg you to linger longer as the librarian announces it is already 15 minutes until closing time. Digging for clues will have to resume another day.

And yet, behind another door, is a more amazing world to explore – the vault. While materials from the vault can be requested for viewing within Texana, the general public does not simply get to wander through what lies locked within.

But this week, the San Antonio Public Library Foundation and the Texana Department shared a few samples of the amazingly varied treasures, most irreplaceable.

“The Alameda,” one of five Hermann Lungwitz paintings of San Antonio from the 1850s, donated by Louis Ulrich

“Wake Up, America!,” part of Harry Hertzberg’s collection of posters from World War I

These riches all require special care and extremely knowledgeable librarians to assist with access, a budget-stretcher for the Library. The Library Foundation wants your help in preserving the collections in Texana for generations to come.

Hoping for another show-and-tell session in the future, and sure wish the ongoing celebration of the 150th anniversary of the San Antonio Express-News included digitalizing the first century of newspapers for the Library before some of us become microfiche hunchbacks.