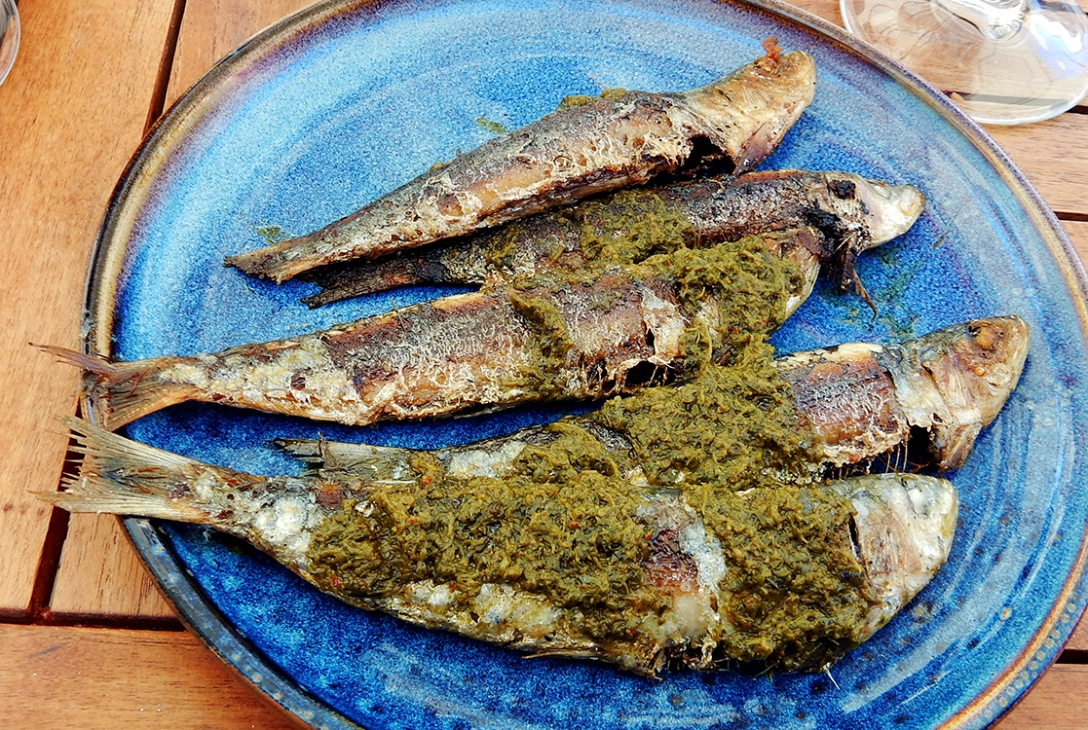 We’ve taken you to eat, virtually only, in Bordeaux’s Marche des Capucins and along Rue du Ha, so now we’re going to wander willy-nilly through the city for a final wrap-up of restaurants we sampled.

Located along the Quai des Chartrons, Pastel was among our favorite contemporary French restaurants in Bordeaux. Lunch requires reservations, and, waiting late, we only succeeded in obtaining those once. The soft lemony cheese appetizer with eggplant and tomato confit was particularly refreshing and memorable.

END_OF_DOCUMENT_TOKEN_TO_BE_REPLACED

Seems too long since this blog made a food stop.

Fresh red tuna was running while we were in Spain this spring and summer, and the above photo represents an upscale presentation of it from the kitchen of chef Gonazlo Jurado of Tradevo Centro. The name represents a fusion of the words tradition and evolution. An avocado roll, or canelon, filled with shrimp is particularly luscious.

Like Tradevo, ConTendor Slow Food Restaurant is a little more upscale than we tend to frequent, but neither results in particularly high tabs at lunchtime. The long and varied daily menu is written on a large chalk board, and the server reads through the entire thing with you to see if you have any questions. It can be parked on your table briefly for consideration, but on a two-top it is awkward to read and we quickly found ourselves forgetting what some of the dishes were. Everything is presented artfully, such as an unusual deconstructed dessert of eucalyptus ice cream with creamy meringue and basil hazelnut paste on the side.

The winner for our favorite people-watching patio is Quilombo. The casual spot is on an intimate plaza on a mainly pedestrian narrow street frequented by locals. The mussels and salmon burgers are good, but it was the patio that really drew us back.

While one Arte y Sabor Tapas is located on Plaza Hercules, there is an overflow one about half a block away that attracts more locals. The prosciutto-wrapped asparagus and the falafel are welcome changes. Artefacto Grill & Beers is just off the plaza as well, and, as a result, snagging a table at lunch is much easier. Love their cheesy rice-filled zucchini and croquetas filled with spinach and pine nuts. Burgers, from veggie to retinto beer, are their specialties.

We did not realize when we stumbled across Vida Loca that it had only been open a week. The neighborhood evidently was keenly aware, so it was packed. The traditional garbanzo stew and boquerones are spot on, and the plate piled high with fresh vegetables and slices of jamon is uncommonly varied. Tucked away on a side street and seemingly undiscovered by many tourists, tables in Estraperlo are wedged between shelves holding fresh vegetables and other “ecological market” items for sale. We shared a lunch of artichokes with jamon and a stir-fry with shrimp.

We tried more than one Morroccan/Arab restaurant but were shocked to find our most successful meal in that vein right smack in the middle of one of the areas most congested by tourists – a Halal restaurant, Al Wadi. The chilled squash with a pomegranate, honey and lemon sauce is a pleasant starter, and lamb arrives atop the most flavorful savory rice ever entering my mouth. And then, right under the landmark visitor magnet Las Setas, was Malavida Tapas. I almost left it off the list, but the photos rescued it at the last minute. We went on a rare rainy day, so it was empty instead of overrun. The vegetables, the seedy avocado salad and the beef panes are all much better than one would expect to find in the location.

The final stop offered for your meal consideration in Sevilla almost reminded me of the old Europe on $5 a day (pretty nigh on impossible even in the olden days) guidebooks; it was that much a bargain. A simple neighborhood hole-in-the-wall, El Enano Verde offers ridiculously low-priced freshly prepared vegetarian fare. Both our wok-style vegetables and black rice with snow peas resulted in clean plates. I am including this because it is an ideal conscious-clearing spot to balance your budget and your calories after indulging in too many splurge meals.

But, you might ask, where is the pizza? Anyone who knows us is aware we don’t travel for long without pizza. We tried several in Seville but failed to find one we would recommend. But our Spanish options were so abundant we survived easily.

With a month of meals in Seville under our belts, it is hard to know where to begin to talk about food. So… starting with some of the traditional dishes we encountered over and over again throughout Andalusia.

Friends from San Antonio wisely insisted we all squeeze into and belly up to the bar at El Rinconcillo. The first tavern on this spot opened in 1670, so it would be fairly impossible to find a place more flavored by its history. Although, the current owners, the De Rueda family, only have operated a tavern in this location since 1858. A platter of boquerones fritos, fried anchovies, was chalked onto the bar counter next to our beer count as the method of recording our tab. These were perfect and perfectly addictive and are an order we repeat throughout our stay in Spain.

While Antigua Abaceria de San Lorenzo might not be an establishment as ancient, it certainly feels that way. The restaurant is located in a 17th-century house in a former abaceria, an old-fashioned grocery store specializing in vinegars and oils, dried legumes and cod. Locals claim most tables, so visitors without reservations rarely can obtain a spot. People often order and eat elbow-to-elbow at the counter or take food to go. The ham is cured on premise, and the featured croquetas naturally are filled with either that or with cod.

In two months, I am not sure we have entered a single restaurant or bar in Andulusia without croquetas on the menu. Seriously. Usually multiple kinds. It almost feels as though there must be a law requiring them to be offered if a business wants a license to open. Seville also seemed to require featuring patatas bravas; a spicy blend of spinach and chickpeas; and salmorejo, a cold tomato soup pureed with bread to thicken it.

In restaurants, few customers contemplate the menu without relishing the requisite olives and downing a cana, a small draft beer, even when ordering wine next. Reasonably priced wine is available in all but the luxury establishments, with wine by the glass generally running $3 or less. And that cana? Rarely above $1.50.

And my favorite, despite that recent column disparaging the custom in the New York Times, sharing of any and all courses is encouraged. And you rarely end up with just one large entree, unable to sample other menu items. Numerous dishes are offered in three sizes: tapa, 1/2 racion and racion. Unlike at home, there is no waitstaff glaring at me for ordering only from the appetizer section. Enjoying an all-tapa meal is totally acceptable.

carver of the jamon at Antigua Abaceria de San Lorenzo

Casa Antonio “Los Caracoles” qualifies as a sexagenarian. The inside fills up with locals of about the same vintage who crave homestyle food the way it was served when they were young. The recipes are classic; the dishes good and fresh.

The chickpea stew here was made with cod, which was a bit of relief. The Mister is a bean stew fan, but the traditional fabadas, callos and pucheros served in Adalusiacan sometimes prove challenging with their hodgepodge of meats all thrown into the pot together – chicken, chorizo, blood sausage, scraps of jamon, stew meat, panceta and even tripas. But wowsers, the resulting thick broth always is flavorful.

Our first taste of tortillitas de camaron, crispy shrimp fritters, was at Los Caracoles. I assumed they might be a limited-edition Lenten special on menus, but they survived Easter throughout the region. And padron chiles. So simple and often the only non-battered vegetable (the battered one being eggplant sticks drizzled with cane “honey”) at pescaitos specializing in grilled and fried seafood.

And the spot to find the freshest seafood? The markets. While often getting jostled by people trying to get close enough to a counter to order, there is a civilized air to eating in markets in Spain. No paper plates and flimsy plastic forks, but actual pottery plates, metal utensils and glassware for beer and wine.

At the always bustling Bar La Cantina in Mercado de la Feria, keeping track of orders has been modernized from the chalk-on-the-bar system used at El Rinconcillo. A dry-erase board is employed. We feasted on fried boquerones, stuffed mussels and octopus, and then, for dessert, grilled sardines and cuttlefish.

While Mercado de la Feria remains a traditional food market, most cities in Spain now have mercados that function only as prepared food halls. Mercado Lonja del Barranco is found in a handsome, soaring-roofed riverside pavilion. While the look is clean and contemporary and the traditional foods abundant, one misses the authenticity provided by neighboring stalls offering produce, meats, cheeses and seafood. And locals. The crowd is almost all-tourist.