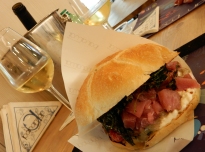 Pulpo and wine. Not an uncommon combination for us while in Malaga, but fortunately we had an apartment for recovery. And octopi never invaded dreams, as far as I know.

The historic center of Malaga is pretty pristine, with polished marble pavers on pedestrian streets gleaming as though in a palace.

A few steps outside, and artists displaying varying degree of talents begin to commandeer attention in several neighborhoods. Some work is obviously invitational or approved; others unauthorized. Some artists cannot resist reminders that this is the birthplace of Picasso.

This post represents one of a series of shots snapped during wanderings. For visitors, street art always seems a way to gain a deeper understanding of people inhabiting a city.

We kept trying to find just the right seafood fit for our tastes while we were in Mexico City. The ceviche de atun with ginger at the reasonably priced Marlindo was among our favorite dishes, and the shrimp atop a tostada were beautiful. But Marlindo definitely is an ultra-casual neighborhood spot without much atmosphere, better for grabbing a quick bite than for lingering over a bottle of wine.

El Parnita is amazingly popular and bustling, but the dishes failed to excite us. On the other hand, we found ourselves the only ones in the dining room for lunch at Lucas Local. But the softshell crab sandwich at Lucas Local was phenomenal, and the pulpo and dried shrimp ceviche was refreshingly good and imaginatively presented in a coconut shell. Softshell crab is never easy enough for this Chesapeake Bay girl to find; wishing I had returned for seconds.

Our final week, we finally hit our favorite spot, Campo Baja. Casual, bustling rooftop with an open-kitchen concept, and it was not even a full block away from our apartment. The approach to each dish was distinctively different, making wandering through numerous shared plates feel as though we were venturing into new territory.

If you are visiting the neighborhood, hope our photos help you find the right spot to suit your seafood mood.