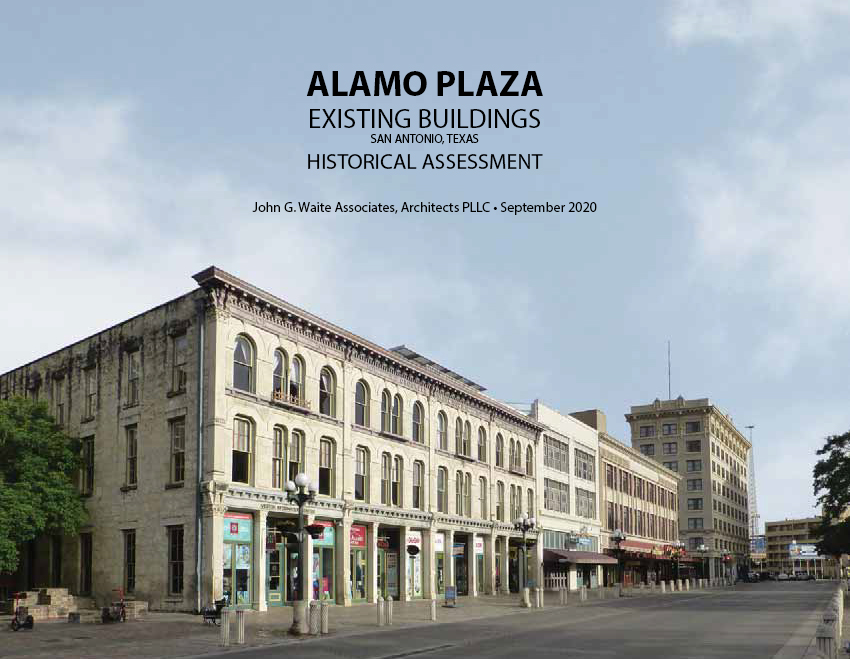 Above from left to right: The Crockett Block (1882); the Palace Theater (1923); and the Woolworth Building (1921) on the west side of the plaza facing the Alamo

Been dreading the arrival of the Historical Assessment of a trio of historic buildings on the west side of Alamo Plaza conducted by John G. Waite Associates for the Alamo Trust. My trust eroded by a dearth of information emanating from the Alamo during the past several years, I assumed the instructions given the architectural firm might have been skewed to doom them to the wrecking ball. But I must have been wrong.

The conclusions reached by the study are a dream come true for preservationists and proponents of adaptive reuse. The landmarks are viewed as prime for transformation into a visitor center and museum for the Alamo.

The following are excerpts from the firm’s final report:

In the inspection and analysis carried out by the JGWA consultant team in 2019, it was found that the buildings were generally in good to very good condition….

“All of the buildings are structurally sound, and a preliminary structural analysis indicates that all three buildings have the capacity to meet modern structural loading standards….

“The adaptive use of these buildings for new functions is an inherently sustainable act….

“…All agencies with historic preservation authority, from UNESCO to the City of San Antonio, have acknowledged the importance of the three Alamo Plaza buildings—either individually or as part of a historic district. Our research indicates that no historic preservation agency has questioned the architectural and/or historical significance of any of the three properties…. There is no question that all three buildings meet current criteria for listing in the National Register.

“If properly developed, in conjunction with adjacent new construction, all three buildings can act together as an appropriate physical and interpretive connection between the multiple layers of historic context represented by the Alamo and the downtown commercial core of San Antonio.

“Recent international trends in museum design and development have emphasized the reuse and transformation of historic industrial and commercial buildings for interpretive programming, providing stronger links between complex layers of history and dynamic visitor experiences. Through the historic preservation treatments of exterior restoration and interior rehabilitation, these three buildings on Alamo Plaza can provide the opportunity for a unique twenty-first century museum experience that is innovatively housed within some of San Antonio’s most historically significant commercial architecture of the nineteenth and early twentieth centuries.”

Faced with these conclusions, it would seem as though there is no danger the Texas Historical Commission would consent to the demolition of any of the three. Only a month ago, the commission turned down the City of San Antonio’s request to move the 1930s Cenotaph several hundred feet to the south – no threat of demolition in the picture at all.

So why continue to fret about this trio of landmarks? The people who lobbied for the retention of the Coppini sculpture smack dab in the middle of the plaza and within the walls of the original ancient mission were motivated by totally different concerns.

Take Lieutenant Governor Dan Patrick, who plunged into the fray about the relocation of the Cenotaph more to combat Texas Land Commissioner George P. Bush ahead of a future political campaign than to try to resolve the complicated issues involved in the proposed redo of the plaza as part of the Alamo Plan. According to Scott Huddleston in the San Antonio Express-News:

We need to stop and pause, members. This is the Alamo that we’re talking about,” Patrick said, telling the commission it faced the “most important vote that you ever cast.”

He said the Alamo plan is “moving forward” but still is unfocused. Patrick said that although the site should reflect the Alamo’s 1700s mission-era origins, the primary narrative must be the siege and battle of 1836 — “the most important 13 days in the history of Texas and Western civilization.”

I’m not even going to begin arguing the merits of that ridiculous Texan-staring-at-his-belly-button view of western history. That viewpoint though is what endangers the three landmarks that the assessment concludes are both worthy and suitable for reuse. There are those who think the most important thing in the world is tearing down everything within what would have been the walls of the Alamo compound to create a treeless sizzling hot comal grande for reenactments of the 1836 battle.

Well, they want to remove everything except the parapet added to the Alamo facade by the United States Army well after the battle.

Aside from the parapet, Patrick is a tear-it-all-down kind of guy. In the San Antonio Report, Rick Casey writes:

Speaking before the state commission, Patrick waxed grandiose about redeveloping the area surrounding the Alamo: “If this president wins in November – who knows what the elections are going to bring? You want to take down the federal building? We have a very good relationship with the president. We want the full footprint of the Alamo battle walls? I think if we go to the president, the governor and I, and say, ‘We’d like you to move that federal courthouse to somewhere else, so we can build a full Alamo.’ I mean, he moved the embassy from Tel Aviv to Jerusalem. I think we can move a courthouse. I think we can get that done.”

So, despite the positive report, the landmarks on the west side of the plaza still are endangered.

There are other stories that must be told on the plaza as well from the early mission days, the development of San Antonio as a city and additional crucial ones mainly ignored. The peaceful integration in the 1960s of the lunch counter originally located in the Woolworth Building is regarded as an important part of the history of attaining civil rights for African Americans. And there is the role of slavery in the Republic of Texas and later in the State of Texas.

Texas Monthly is running a three-part series on textbook myths that have been and are still being fed to students – versions of history that ignore contributions of Hispanics and Blacks in shaping the state. Emily McCullar writes:

In the Anglicized version of Texas history that I learned as a kid, slavery was depicted only as a side note, an unfortunate institution that existed alongside Texas settlement, the Revolution, and the Republic, rather than as what it really was: the catalyst that fueled each and every one of those historical events. Texas’s economy as a colony and, later, a republic, was cotton-based and thus was built on the labor of enslaved people….

Free labor from enslaved people was what made cotton profitable. Because land in Mexican Texas would be much cheaper than land in the American South, Austin knew he could easily persuade prospective planters from Alabama, Louisiana, Mississippi, and other slave states to grow cotton in Texas. There was no question as to whether or not they’d bring their slaves. Keeping slavery legal was a key component of the success of Moses Austin’s settlement; Anglo settlement of Mexican Texas would not have happened without it.

In an opinion piece in the Express-News, Aaronetta Pierce writes:

As the state prepares to build the museum at Alamo Plaza, which should include the Woolworth Building, the history of African Americans must fully be told. In June, the National Trust for Historic Preservation issued the following statement:

‘Today, the National Trust for Historic Preservation asserts without equivocation: Black History matters. Historic places of all types and periods should be places of truth-telling and inclusivity. Historic preservation must actively advance justice and equity for all people.’

These assertions should apply to the Alamo Plaza the Alamo Plaza museum, however uncomfortable they make people feel…. As Maya Angelou wrote: ‘History, despite its wrenching pain, cannot be unlived, but if faced with courage, need not be lived again.’

Among the hauntingly tragic stories emerging from the smoldering ashes of the 1836 battle is the unknown fate of a man who remained within those walls serving his “master.” Rather than having his name carved on the Cenotaph, it was found repeatedly in print in a series of newspaper advertisements.

The history of Mission San Antonio de Valero – the Alamo – and its plaza encompasses more than 13 days.

November 3, 2020, Update: UTSA’s blog, Top Shelf, features several photographs of the buildings on the west side of the plaza through the years.

1 thought on “Toast the Historical Assessment of the experts or mistrust the Alamo Trust?”