As seen in an earlier post, seafood often dominated our orders in restaurants. Great seafood often proved easier to locate than the vegetables we found ourselves craving.

Un Sorriso Integrale – Amico Bio Napoli was our salvation. We probably ate there five or six times for vegetable catch-up days. The selection is diverse and always changing to take advantage of the best vegetables of the season. And all are amazingly inexpensive. Always start with a dish of their spicy, truly spicy, fried chickpeas. Rather than make up my mind, I loved getting their mixed plate, which comes with a bowl of soup and six different vegetable combinations. The Mister was hooked on the wok plate. Oh, and a little picante chocolate soufflé to round out the meal.

Re Lazzarone pearl-like pasta with vegetables 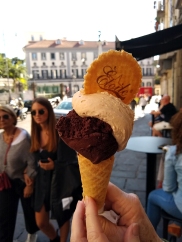 Paccheri, an extra-large tubular pasta, seems to be a favorite regional pasta, with good reason. Antipasti combinations, such as the five-plate selection spread over two photos at Trattoria Scugnizzi Vomero, invite exploration. Two distinctively Neopolitan dishes we tried once but failed to understand their popularity were pasta e patate (pasta and potato is quite a starchy overload) and fried pizza (way too much fried dough).

Most of these restaurants are frequented by locals and were mentioned in the seafood post, so this time around I will just post their links to click in case a photo inspires you to investigate whether to add them to your list of places to try. Since most of these are not tourist-dependent, I am hoping they will survive the current slow-down.

In the Vomero neighborhood:

In the historic center: 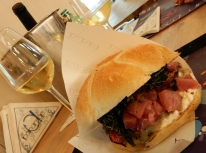