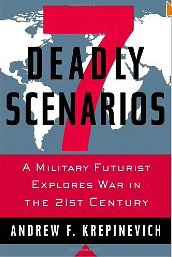 Andrew Krepinevish has done what I would have sworn impossible.  He has almost managed to evoke a sentimental attachment to all of the horrible signage violations invading the Alamo Plaza Historic District, even Shamu disrespectfully flipping his tail toward the shrine of Texas liberty.

The West Point and Harvard graduate struck a little too close to home – only about six or seven blocks away – in one of his 7 Deadly Scenarios: A Military Futurist Explores War in the 21st Century.  His book, not light end-of-the-summer beach-reading material, was published in January 2009 by Random House, and I’m probably the last person to hear about it.  But the “future” he described is nearly here, and he is picking on the 175th anniversary of the Battle of the Alamo:

Sorry to interrupt his story, but have the reenactors cleared out before 8:30, or are they in big trouble?  Am I on the plaza at the tail end of my morning walk?

…a blinding flash of light rips through the downtown area.  Nearby buildings are immediately vaporized.  Buildings farther off buckle and collapse….  A local television station’s traffic helicopter captures the blast at a distance of nearly nine miles away.  As the telltale mushroom cloud begins to rise from the city, the traffic reporter remarks, “My God, it’s an atomic bomb!…”

“Remarks?”  My loft and I were just vaporized.  That reverse commute my husband makes five days a week sounds pretty appealing at this point in the narrative.  I sure hope this is Krepinevich’s worst-case scenario.

The lead shot on the evening news, not only in America but around the world that night, centers on two images: the footage from the traffic helicopter with the reporter’s horrified voice-over; and on-the-scene reporters standing at locations where the severely damaged Alamo mission – the shrine to Texas’s independence – can be seen in the distant background.

The Daughters of the Republic of Texas must have gotten the roof repaired in order for it to withstand such a powerful attack, but I’m not reading another word.  This book gives me the creeps.  Ban this book.

I certainly prefer a symphonic concert for the 175th anniversary.  But tell the reenactors to be on alert, and please, Tony, maybe don’t hang the banner.  Let’s not give the nefarious characters invented by Krepinevich that kind of directional signage.

Rather selfish of me (an understatement much like “remarks”), but could we instead install a banner steering them toward the “reel” Alamo, John Wayne’s Alamo, the one in Brackettville?

Update on August 31:  The “reel” Alamo is closing to the public.