Hola my Teresa, I’m thinkin’ of you now in San Antonio.
I have 27 dollars, and the good luck of your picture framed in gold.
Tonight I’ll put it all on the fighting spurs of Gallo del Cielo,
Then I’ll return to buy the land Pancho Villa stole from father long ago

I’ve listened to Joe Ely weaving the sad tale toward the inevitable death of El Gallo countless times.  It’s tragic, but I dismiss it as more of a folk tale than a current event.

After all, one of my favorite possessions is a cockfighting plate produced in San Antonio by Ethel Harris’ San Jose Pottery.

And I find it amusing to reflect on San Antonio’s rough and tumble past as evidenced in the pages of the 1911-1912 edition of The Blue Book, a visitors’ guide to the city’s red light district.  In addition to a multitude of brothels just south and west of City Hall, there were at least two cock pits – Ogden’s and Monterrey – located on South Santa Rosa.  I even incorporated their ads in one of my Blue Book series of prints:

“Mayor Callaghan crowed at City Hall during the week, but spirited fights could be found just two blocks to the west on weekends.”

The palenque, or cock pit, in the former ghost town of Real de Catorce remains one of my favorite landmarks to explore.  But that is made easier because I was not with my husband and his younger brother when they stumbled upon men placing their bets on an actual cockfight there.

During one of our jaunts to Mexico, I tried to convince my husband we should buy the ruins of the palenque in Mineral de Pozos, a former ghost town near San Miguel de Allende, to incorporate in a retirement home for us (one of many ill-conceived notions expressed during more than three decades of marriage from which he wisely has managed to divert my attention until common sense returned, albeit always on a fleeting basis).

Our friend Vic pulled out his camera in Haiti this past June to document a cockfight at Delmas 31.  When he lagged on posting a follow-up, I feared he was hooked and was out training a cock of his own.  But my fears were groundless; he simply was flying back to Austin.

Cockfighting is something I prefer to pretend only occurs in the past tense, or, at least, takes place in some other country.  The world is becoming a kinder, more gentle place (dream on, Gayle).  But, in support of this argument, Spanish Catalonians recently enacted legislation drawing an end to their deeply entrenched tradition of bullfighting.

Periodically, media intefere with my naive theories.  The other day, I made the mistake of reading Brandi Grissom’s coverage of cockfights, and their aftermath, outside of Dallas for Texas Tribune.

One by one, Domanick Muñoz pulled bloody and battered bodies out of a pile of feathers, claws and beaks. Roosters that were still gasping for life….

The posted videos are not for the faint of heart.  Grissom makes it impossible to continue in a state of denial.  Cockfighting is not something that should be included in “It’s a Texas thing.”

Update Posted on February 8: Had to add this cautionary tale – “Man Killed by His Own Cock” (my headline)

Update on May 22, 2011: Bobby Jones calm defense in Texas Monthly of his livelihood, breeding game birds, seems blood-chilling to me. “Harvesting” is the professionals’ word for cockfighting:

…what goes on at harvesting facilities is no different from what you see at a golf course, the rodeo circuit, or a bass tournament. It’s a gentleman’s wager, like betting on a football game.

As part of his explanation of legitimacy, he claims that gaffs for cockfighting were brought over on the Mayflower. But, his best point is:

No, what I’d like to see is a law that gives rural counties the power to decide what they want, instead of being told what to do by people in cities. Why are people in areas like Houston and Dallas, where there’s practically no morality, able to dictate what we do in rural areas, when they know nothing about it?

Politics often gets in the way of my livelihood.

Okay, friends, before you start dismissing my prints as “potty art”….

A number of years ago, we were gifted two small sketches by noted San Antonio painter Julian Onderdonk, 1882-1922.  We live in a loft, but these little sketches need to be viewed close up in an intimate setting.  That’s why they hang in the powder room where they are seen as frequently as our art of more humble pedigree, as most guests wind up in that room at some point.

Two series of my prints occupy two entire rooms in Zinc Champagne. Spirits. Wine. at 207 North Presa Street.  The Blue Book Series is found in what is now known as the Bawdy Blue Room, while the Frida y Diego Series resides in La Galería de Frida.

Alright, I admit it.  The “two entire rooms” are hardly traditional, soaring gallery spaces.  They are multipurpose facilities.  You can enter them to view the art privately, with the added convenience of relieving yourself and washing your hands.

Zinc is owned by the “Boudro Boys,” Richard Higbie and Randy Mathews.  The restaurant business takes nerves of steel, and Randy’s therapy lies in metalwork.  While I am sure he would like to exhibit his sculpture in the prestigious Bawdy Blue Room or La Galería de Frida, his artwork is simply too large in scale.  His pieces are forced out into the courtyard. 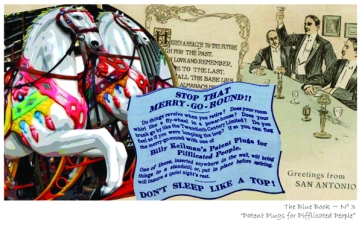 The Blue Book ~ No3, “Patent Plugs for Pifflicated People,” This collage focuses on Billy Keilman’s 1911 Blue Book advertisement for his “Patent Plugs for Pifflicated People,” claiming that “one of these, inserted anywhere in the wall, will bring things to a standstill…” The ad is headlined “Stop That Merry-Go-Round!!” The miracle claim of relief for the intoxicated is combined with a period toast on a “Greetings from San Antonio” postcard and a pair of prancing carousel horses.

Frida y Diego ~ No2, “Dieggos,” Images of Diego Rivera are superimposed on eggs. The cracked egg splits a photo of Frida Kahlo and Diego, with Frida’s bleeding heart from “The Two Fridas” on the yolk.

With the prestigious interior galleries…

occupied by my art…

these sculptures by Randy Mathews…

are displayed in the courtyard at Zinc.

While you probably are ready to zip over to Zinc immediately to see my prints, there are additional reasons to go.  Click here to view Zinc’s menu, and the following is from an earlier post exploring some of San Antonio’s food offerings:

The name immediately lets you know the beverage side of the menu is well-stocked; yet the bartenders do not complain about making something off-menu – such as what I have christened a “tequito,” a mojito with tequila instead of rum.  Zinc is open during the week for lunch, but seems to be trying to keep that secret.  Pears, goat cheese and pecans perk up a small Zinc salad, and the portobello patty melt with spinach, nopalitos and cheese is hearty fare.  The sweet potato fries arriving on the same plate keep me from exploring the menu much farther, despite the high praise friends lavish on the Texas salmon salad with pearl couscous.

So drink at Zinc until you think about that artwork conveniently hung by the bathroom sink.