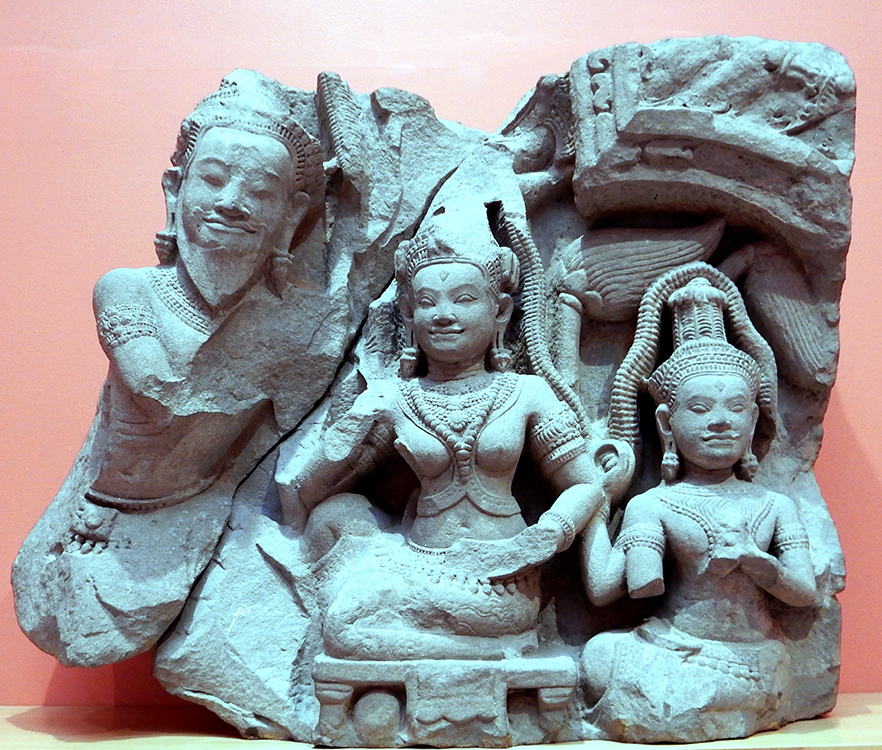 Above: The Marriage of Shiva and Parvati, with Vishnu on her left, 13th century, Angkor, Khmer Empire, Cambodia, Collection of Georges Labit Museum

The son of a wealthy businessman who owned the largest department store in Toulouse, Georges Labit (1862-1899) was not applying himself seriously to his studies, so his father packed him off to Paris to attend the Ecole Superieure de Commerce. Instead of business, Georges developed a fondness for the subjects of history and geography. He also was smitten with the vibrant street scene and managed to accumulate numerous debts, partially from keeping up with the fashionable crowd placing bets on the horse races at Longchamps.

No longer trusting his son to manage his own affairs, Antoine Labit reined in his free-spending ways by placing him under financial guardianship. Georges, however, was able to convince his father to send him to Vienna to further his education in a commercial apprenticeship. The liberated nightlife of fin-de-siecle Vienna appealed to him while his interests continued to broaden with trips throughout Europe from London to St. Petersburg. In addition to learning his way around upscale auction houses, Georges scoured fairs and bazaars for bargain treasures.

After his three years in Vienna, his father began sending Georges to search for unusual objets d’art throughout the Far East and North Africa to stock the shelves of the store for the upper class of Toulouse. (Oh, but to have the punishment for the wild days of your youth be to make such travels). While taking full advantage of the night life in the cities he visited, Georges truly developed both his interest and expertise in recognizing the beauty and value of art from diverse cultures. In the process of acquiring goods for the store in Toulouse, Georges began to amass a personal collection.

He documented his travels with photos of people he encountered, including the artisans crafting regional works, adding a deeper layer of understanding to his purchases. Georges mounted an exhibition in Toulouse in 1889, and that exhibition ignited his desire to have his own museum. His guardianship provided plump enough income to provide him with the luxury of making a grand tour of Italy to study its museums.

Armed with new knowledge, in 1893 Georges hired Toulouse architect Jules Calbairac (1857-1935) to design a Moorish-inspired villa to showcase his collection, mainly items from the Far East. The Egyptian pieces included below were added much later by curators of what became the Georges Labit Museum. The museum project served to entertain the man restless and grounded in what he considered provincial Toulouse.

Through the years, Georges had a convenient relationship with a woman in Toulouse who sometimes accompanied him on his travels. This arrangement worked better when afar than under his family’s scrutiny back in Toulouse. Perhaps under pressure from his father, Georges cast aside his mistress and became engaged to a younger woman. Only days before the scheduled wedding in 1899, Georges was somehow stricken, dying after several days in agony.

The public was left mystified by the cause of death, and rumors were abundant. Some claimed the brother of the abandoned mistress successfully wrought revenge; others even suspected Georges’ father of becoming angered during a family argument and dealing a fatal injury to his offspring. Throwing fuel on the fire, Antoine Labit reportedly never requested any kind of investigation into the death of his son and destroyed many family papers from that period. The former mistress retreated to a nunnery.

As his son’s heir, Antoine now owned the museum. He bequeathed it to the city of Toulouse in 1912, and the last days of the voracious collector remain a mystery.