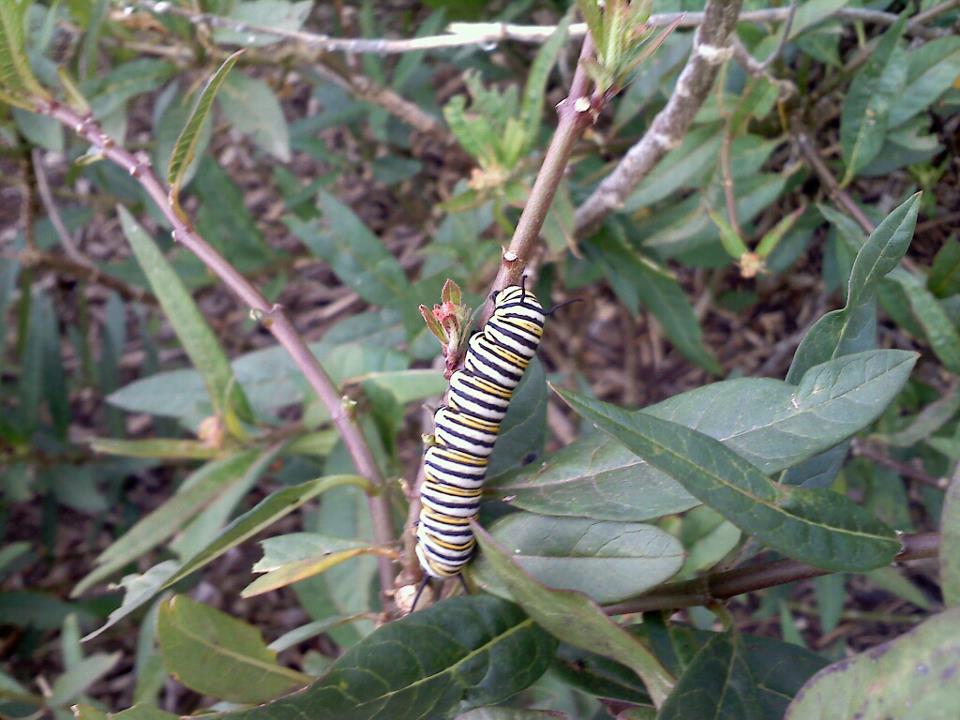 While we were visiting the Montréal Botanical Garden, we spent some time in the Insectarium. We found out staff only recently finished the tricky task of tagging and releasing monarch butterflies.

According to Global Montreal, the tags on the butterflies’ wings are 9 millimeters in diameter. That worried me at first, but only because I am mentally meter deficient. Nine is the equivalent of about 1/64 of an inch.

Even at that, the miniscule tag weighs almost 1/10 of a butterfly. Does that make it wobbly in flight? If someone removes 10 pounds from the stack of weights on the assisted pull-up machine at the gym (Without getting specific, let’s just say that is less than 10 percent of my body weight.), my arms notice. They cannot hoist my body skyward. Again, I guess I should not worry, because some of the monarchs monitored in past years have arrived safely at their Mexican destination.

On to my next worry. We, in San Antonio, are on the flight path. But, are we going to be ready?

I mean, I just made almost that same flight Saturday, and it made me really hungry. The mister and I bought a sandwich in the airport to split on the plane to Newark. But that first leg left us hungry still, so we bought two sandwiches to eat on the flight to Houston. Then we still had to refill a little in Houston. It took me a beet and feta salad and half a bottle of wine to be able to make it home.

So, we required considerable refueling to make that flight. And that was with complete pull-up assistance from the plane.

In case you are having difficulties following my illogic, after covering more than 1,700 miles, those fluttering monarchs are going to be plenty hungry on arrival.

This past spring, I watched the caterpillars along the Museum Reach of the River Walk, and they really pack it away. They decimated that milkweed patch. I walked upriver yesterday to inspect, and it has yet to fully recover.

So that’s why I’m worried. The monarchs are already on their way here, and the milkweed’s not ready. Hurry up and grow. You have a job to do.

Which all leads me back to the Insectarium. As with the rest of the garden, it took more time than we expected. We are even less “bug people” than “plant people.” But more than 160,000 specimens are housed there.

That’s a lot of bugs, butterflies and moths. Obviously, we did not meet them all or we would be flying back way behind the monarchs.

The displays make bugs fascinating. Many insects are shockingly beautiful; many are shockingly horrifying, creatures created to star in nightmares. Why, get this, they have cucarachas even bigger than we grow them in San Antonio!

I’m just happy we were at the Insectarium on a September weekday and didn’t have to shove any kids aside to get our noses up near the glass.

Update Added on October 4: Not desiring additional recaps of last night’s presidential debate, I drowsily reached for the off button on the clock radio this morning when the story changed. NPR (TPR in my neck of the woods) ran a story on migrating monarchs captured in a new 3-D film for IMAX, Flight of the Butterflies, directed by Mike Slee.

The NPR story features some cuts, but the film is not migrating toward the Alamo IMAX very quickly. In the mean time, here is the trailer:

And, Monique Beaudin blogs about monarch adoption, birthing and releasing at home in Montreal.

Update Added on October 5: The San Antonio Botanical Garden has a seasonal list of bloomers you can plant to refuel migrating monarchs, and the San Antonio Zoo exhibition features 15 to 20 species of farm-raised butterflies fluttering freely in a walk-through enclosure from March through November each year.

Update Added on November 6: And then there was the monarch taking our migration shortcut by hopping aboard Southwest Airlines to the San Antonio Botanical Garden….

Update Added on January 18, 2013: The Native Plant Society of Texas is making it easier to plant more milkweed for monarchs to munch on during their long journey up and down North America:

The purpose of the program is to educate members and the public about Monarch conservation, to produce and distribute milkweeds that support reproduction by Monarch butterflies, and to restore Monarch habitats throughout the Texas migration flyway.

Grant sources are co-funded by Native Plant Society of Texas  and Monarch Watch. The total amount of monies to be budgeted for this program varies. Normally it is an amount that will provide for grants ranging from $50 to $400. Chapters and others are not required to spend their own funds to match the amount of the grant.

4 thoughts on “Monarchs from Montréal headed for our milkweed”