An enduring relationship: she likes a man to be seen and not heard.

A couple just taking the plunge.

Budapest does the blues with glasses of rosé.

A water-goblet xylophone player reminiscent of the Ed Sullivan Show of the same period.

Everyone armed with cellphones.

Nuns on the run. 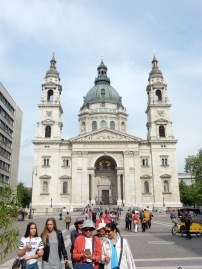 Another realizing the lap she’s approaching belongs to a figure much more ominous than Santa.

A young boy quickly casting aside his childish toy to pose upon a voluptuous bench.

A Roma protesting eviction from the park she chose as home.

Oh, and a couple of seniors taking a selfie in a ruin pub.